This blog was first published in Brookings Future Development Blog. The authors are Ipchita Bharali and Indermit Gill.

As countries move from low to middle income, they experience big shifts in the composition of public and private spending on health. One reason for the change in financing is the eligibility criteria for concessional development assistance: Foreign aid starts to decrease after countries move into middle income. This is evident from a snapshot of health expenditures across the income spectrum, used to proxy what happens to a country as its per capita income increases. Figure 1 charts health expenditures by source for countries organized from lowest to highest GDP per capita in year 2015; charts for 2000, 2005, and 2010 look similar. The black vertical lines mark the gross national income (GNI) per capita thresholds for low, lower-middle, upper-middle and high income, revised annually by the World Bank.

Much of the drop in external financing for health happens during lower-middle income, namely per capita gross national incomes between roughly $1,000 and $4,000. By the time a developing country has a per capita income of $5,000, it should expect little or no assistance for healthcare from abroad (the dark green segment in Figure 1). 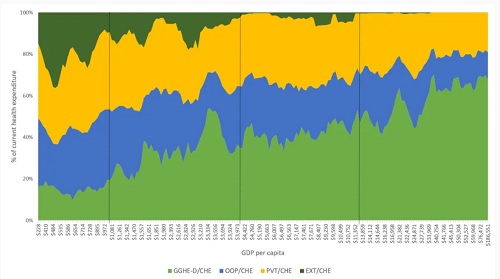 The other change during the lower-middle income phase is in the share of healthcare financed by government spending, which increases from about a fifth to more than a third of total health costs (in light green). It continues to increase in upper-middle income. By the time a country is a high-income economy—a per capita gross national income of more than $12,500—this ratio is about half.

The relative importance of the other two components of healthcare financing—private arrangements (in yellow in Figure 1) and out-of-pocket spending (in blue)—remains roughly unchanged during middle income. Indeed, the share of private health spending through insurance schemes is pretty much the same in low-, middle-, and high-income countries. 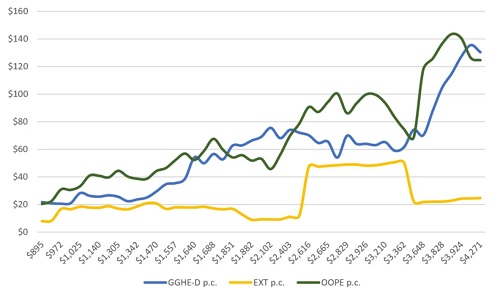 In summary, the stylized facts are that during the transition through middle-income, increases in domestic government spending start to replace foreign developmental assistance, and government spending increases to substitute for out-of-pocket spending only in high-income economies. The question that should concern policymakers, development agencies, and donors is whether and how this can be changed. Put another way, can middle-income country governments both pay more and stimulate the growth of reliable and less regressive private arrangements?

The transition policies of different multilateral and bilateral donors vary widely. Eligibility conditions for aid vary across donors based on parameters such as disease incidence, coverage rates, and other features of the health care system. But the cutoff generally kicks in when a country crosses into lower-middle income. As donors start to leave, LMIC governments are expected to start funding health programs themselves. This means mobilizing more taxes and contributions, to make up for declining grant financing and to service more borrowing by the government.

Previous analysis by Duke University’s Center for Policy Impact in Global Health has documented that the increment in taxes and contributions in the transition from lower- to upper-middle income levels is small. While the average per capita GDP of the typical upper-middle income economy is nearly triple that of the average lower-middle income country, the average ratio of taxes and contributions to GDP increases by just 4 percentage points. The analysis also suggests that increases in foreign aid are associated with lower revenue mobilization in low and lower-middle income countries. Governments and donors should worry when external financing is inadvertently structured to weaken domestic resource mobilization efforts. The result is that LMIC governments often have neither enough money nor capacity. 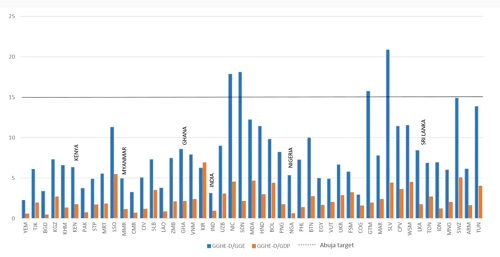 Note: Numbers are for 2015; in 2019, the World Bank reclassified Sri Lanka as an upper middle-income economy.
Source: World Development Indicators.

This problem has not escaped notice. In 2000, for example, the leaders of the African Union pledged to dedicate 15 percent of government spending to the health sector. Using this as a benchmark, most LMICs fall far short. On average, LMICs with higher incomes do spend almost four times as much as the poorer countries, but there can be big differences between countries with similar per capita incomes. In our current work, we are looking more closely at six countries that span the lower-middle income spectrum: Kenya, Myanmar, Ghana, India, Nigeria, and Sri Lanka (upper-middle income since July 1, 2019).

Whether or not the structural changes in public spending that we see are good or bad for people in middle-income countries is still a matter of debate. The persistently high share of out-of-pocket expenditures across the middle-income transition suggests much room for improvement. Financial risk protection is a high priority in the progress towards universal health care. The question is how developing countries can put in place systems that are robust in the face of deficits in coverage and financing, donor exits, changing diseases, and evolving demographics.

Duke University’s Center for Policy Impact in Global Health is partnering with think tanks and universities in sub-Saharan Africa and South Asia to better understand health financing and delivery in countries at various stages of transition from donor financing. The research aims to untangle the interconnected issues in disease, demography, development assistance, and domestic finance (the “4Ds”) in six countries and assess their preparedness to move from donor support to domestic finance. Some of the questions that we are trying to answer:

We plan to report our results in a series of posts on this blog.

Indermit Gill is the Director of the Duke Center for International Development.